GIF It Good: The Intersection of GIFs and Memes (Part Two!)

(Part One of this series on GIFs can be found here.)

In my previous blog post I gave a basic run-down on GIFs, specifically how we use them to recall, advertise, and appreciate small moments within a canon. Today we're picking up where we left off and diving into the GIF's intersection with memes.

Now I spend a lot of time on tumblr. Too much time, I'm sure. There's certainly plenty to criticize about the social media platform----both in terms of its structure and its anon/flaming culture----but you can't deny that if you want to keep up with the latest memes, tumblr is your best bet. It sure as hell isn't Facebook. How many times has a friend shown me this "cool new thing" that's actually 3+ years old? Too many times, friends. Too many times.

Limor Shifman, author of Memes in Digital Culture, makes two distinctions that are useful here: the first is between traditional memes (like Kilroy Was Here) and online memes (what we'll be focusing on today); the second is between her definition of memes and viral content more generally. Susan Blackmore claims that "any type of information that can be copied by imitation should be called a meme," (Shifman 39) but Shifman highlights the transformative aspect, the ability to remix the work, to somehow position yourself in relation to the text while still having the foundation of the joke remain recognizable. It's the difference between forwarding the Double Rainbow vid to all your friends and presenting your own version of Is This a Pigeon? Viral content can become memes, but it's not at all guaranteed.

Can you deliberately create a meme? I'd have to say no. It's always possible that someone who posts a joke or a shitpost hopes that it'll take off, but if it does that's simply an enjoyable coincidence. As far as I know there's no way to predict what thousands of people will find both funny and versatile enough to evolve into a meme----and these creations are heavily embedded in current popular and political culture, meaning that they're quickly and constantly evolving. There's simply too much randomness and luck associated with memes for them to be a controllable form of content. Not that people haven't tried:

I'll admit, I like the It's Thursday post, but as far as I know it's just that, a single post. It's funny and tied to a specific time----like Oct. 3rd and It's Gonna Be May----so it has some characteristics of a meme, but it hasn't changed over the years. No one has picked up and reworked the format to suit their own needs. Earlier I mentioned the Is This a Pigeon? meme and that is a perfect example of how the format allows people to adapt it to their own fandoms and interests. It even allows for referential jokes.

So, digital form of media conveying a repetitious joke? Check. The joke contains transformative aspects that reflect something about the author/their fandom/their beliefs? Double check. Tumblr has plenty of those. Take this set pulled from Age of Ultron:

The who the fuck/whom the fuck meme is an oldie but a goodie and it relies heavily on the careful attribution of dialogue to the right characters. Anyone immersed in the MCU knows that Tony is exactly the sort of snarky asshole who'd pull this kind of shit, right in the middle of a mission no less. And though this isn't really the most realistic characterization for Cap (the MCU turns him into much more of a goodie-goodie than a stubborn-as-hell soldier from World War II would actually be, especially when it comes to cursing), it fits well with this particular version of Steve, the one that the blockbuster films have cultivated. After all, this joke is simply a reworking of what Cap actually says in the opening clip. He really does call out the Avengers on their language.

However, the success of GIF-sets like this----23,000 notes and counting----isn't just about aligning the right dialogue with the right characters. It's a visual medium, and thus the pictures need to sell this interaction, especially when the viewer knows that it didn't really occur. Part of this is in the GIF-er's ability to match up the actors' mouth movements with the words, but that's just a small part of a much larger picture. Most viewers are happy to ignore any inconsistencies along those lines. Instead, there's a focus on the actors' overall body movement. Given that we're changing the dialogue, do the way the characters otherwise express themselves match up with what's now being said?

This set provides an excellent example of perfectly chosen frames. Tony appears mildly confused in both GIFs ("Who the fuck?"), but more teasingly confused in the second ("Whom the fuck?"). And of course, it's Steve's head-hang that really sells it. He's no longer just exhausted after a brutal fight. He's just done.

We see similar work occurring in this Brooklyn Nine-Nine set. The "Can I Get a Hell Yeah?" conversation has been floating around tumblr for a long time now (take note of how many memes resurface when applied to new, popular content) and I've seen it attached to more than one fandom. This is the first time though that I can completely, without question, 110% imagine the characters speaking these lines. Hell, you could steal this dialogue, throw it into a B99 cold open, and no one would even blink. They'd definitely laugh though. Is this something Jake would suddenly yell to his team after something went his way? Yep. Would Holt correct his grammar in a serious tone, hiding the fact that he's just happily messing with Jake? YEP. I can hear "You should have gotten a hell yeah during the break" and "But I didn't NEED a hell yeah during the break" so easily that it actually succeeds in improving the original joke for me. The exchange reads exactly like a normal B99 script, which goes a long way towards explaining why the liberal, vaguely absurdist comedy is such a hit within the tumblr community.

Collections like Incorrect Marvel Quotes and the B99 set strive to be persuadable as well as funny, to "trick" you into thinking this is canon. Not literally. Fans know their sources too well for that. Rather, the sets that are well put together generate a willingness to pretend that you were tricked----"This is so totally canon!!" It's a testament to the GIF-er's skill and their knowledge of the characters. But other sets, far from trying to re-imagine the canon, are more interested in just drawing parallels between it and other kinds of fan content. Rather than try to make you think, literally or kiddingly, that this dialogue occurred in the film, these sets work to set up a humorous asssociation, like these two GIFs from Thor: Ragnarok.

The yeet meme will always be funny, but it's particularly successful when attributed to chucking a person instead of a soda can. There's the added joy of calling Loki (fittingly) "bitch" and trying to puzzle out what exactly "empty" means when aligned with a guy's personality and soul. Especially when he's supposedly dying in this scene (an example of how keeping the original dialogue can sometimes enhance a meme rather than detract from it). It’s also important to note that this fandom choice very much aligns with current tumblr culture. MCU is once again the Big Thing online and ever since Black Panther gave us the perfection that is Shuri, fans have speculated, in the most entertaining ways possible, how she and Peter would demonstrate their Gen Z humor to a host of very confused adults. 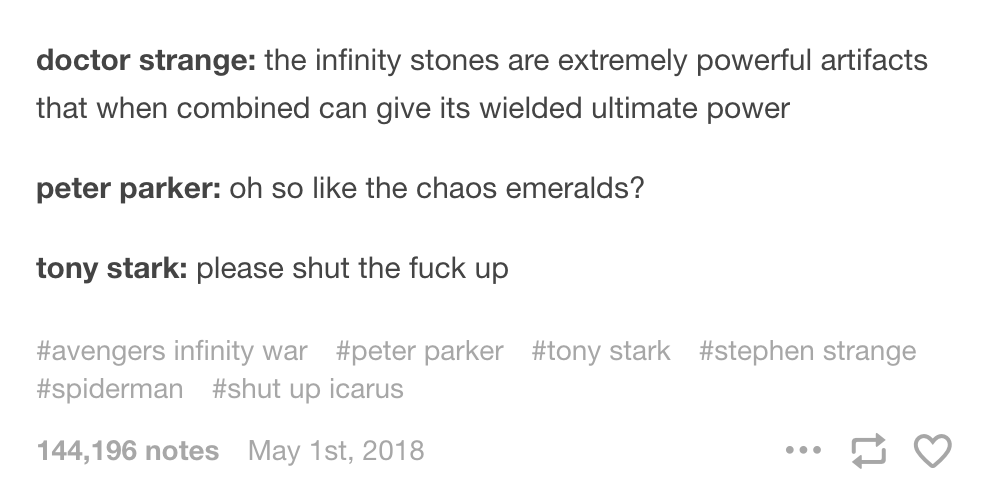 A Thor “yeet!” GIF-set fits right into the trend because if any Avenger had the personality and drive to understand Millennial and Gen Z memes? It’s Thor. Definitely Thor.

Get Help was a true highlight of Ragnarok and it combines remarkably well with the original vine, making a funny moment even funnier. As one reblogger commented, "PLEASE I'M CRYING" and honestly? Same. The image of chucking something (usually something important or vaguely dangerous) into a crowd of people while screaming YEET is funny enough on its own, but putting those words and actions into the hands of a beloved character? The princely god of thunder no less? Well, yeet just got a whole lot better.

Though I don't often see them on my dash, GIFs and memes go hand-in-hand in a truly wonderful way. They feed off one another, GIFs helping to enhance, refine, and sometimes revive the original joke; the jokes themselves amping up what's often just a visually engaging medium. It's a unique form of art: finding what popular meme is best paired with the show/film of your choosing, then whittling down all that material to the exact scenes----the frames, even----that will sell the meme as a believable, in character, worthwhile text that your audience will accept. It takes more time and consideration than most people would expect.

But then, that can be said of most fanworks :)

Stay tuned for part three where we take a look at GIF storytelling!